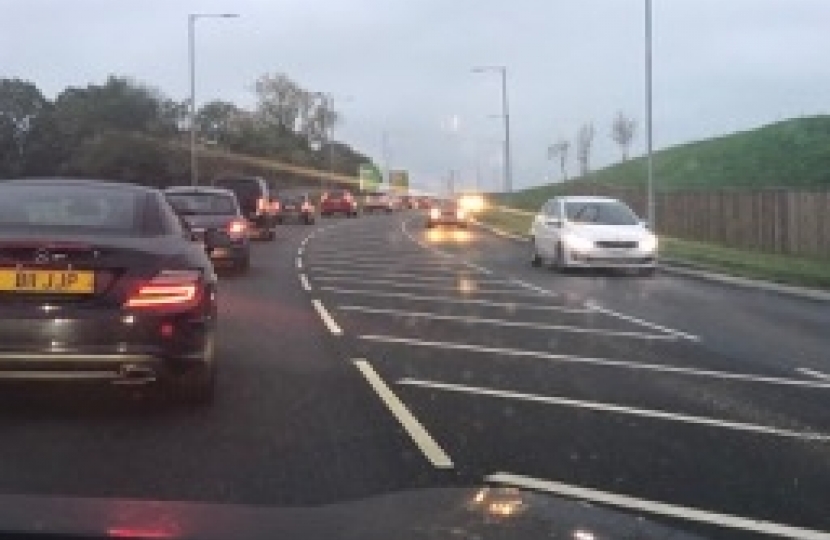 I have known about the Hazel Grove bypass most of my life and as the prospect of the road actually became a reality I was absolutely delighted. At times it was a pain to live with during its construction but we got through and now I can’t hide my disappointment that it hasn’t immediately fixed all the traffic issues in Hazel Grove and has in some places made them significantly worse.

I know that there are some real benefits to residents heading to and from the Airport, there are massive time savings for those heading to the M56 and all points to the West, it’s possible to get to the M60 and M56 without going anywhere near Stockport and that is a real bonus. It is quicker than I ever remember to get to the A34 and there are some significant improvements to traffic through Stockport.

There are also some real local downsides at peak times at the moment. The A6 towards High Lane, and the A523 To Poynton are both packed and very slow and these lead to a number of times during the day that the traffic is badly fouled up in Hazel Grove, High Lane and at the Fiveways partially from the inefficient operation of the junctions. This was not what I and everyone else wanted this road to deliver to Hazel Grove and its immediate environs.

I am mortified to find myself being critical of a project that I so want to work and improve the lives of local residents by moving traffic away from our Village Centre.

These problems are not being ignored, there are many members of the public asking fair questions about what’s gone wrong. There are Councillors like me who are frustrated that our new road has not solved at a stroke all our local traffic issues (no matter how unrealistic my expectations were…). There are officers of both Stockport Council and TfGM who are keen and motivated to make this road work for us all.

Stockport Council and TfGM (Transport for Greater Manchester) have been onsite most days since the road opened and have been monitoring the function of the traffic lights all along the A555 but the A523 Macclesfield Road junction of the A555 has come in for significant attention.

There are changes being tested that will be implemented to the signalling timings before the end of November. This will change how the North & Southbound timings run with the right and left turns onto the A555.

The flow of traffic up High Lane and through the junction at Windlehurst Road is to be investigated to see if there are realistic improvements to the timings of the lights to improve the flow southbound in the evening.

There is also some additional equipment to be installed to tie the lights at the Fiveways and the A555 junction together. This will happen by the middle of December 2018 and should significantly improve the junction’s throughput. Its probably fair to ask the question “why wasn’t this done initially?” and to that I don’t have an answer other than to say that it is being done now and as quickly as possible.

This is a major project and I was perhaps naive to believe that when we opened it all would be well and the traffic would flow perfectly. There is no real data that defines a ‘normal’ day at any of its intersections because it didn’t exist to use before the middle of October 2018, the traffic volumes at a number of points along its length change from day to day at the moment as more and more people remember that it is available the more those numbers will change.

Frustrating though it is at the moment that this hasn’t just delivered traffic utopia as I certainly wanted it to there are a number of people involved with tuning the traffic flows on/off and across its junctions that are working to improve the situation now.

Rest assured that there is no complacency in resolving the traffic issues to the best of our abilities, We have not seen the best of what this road will deliver locally over the years to come.